The team at Elfenworks melds a Silicon Valley mindset, the power of partnership, and a gift for storytelling to foster creative solutions on the cutting edge of hope. We hope you'll enjoy these short team bios. 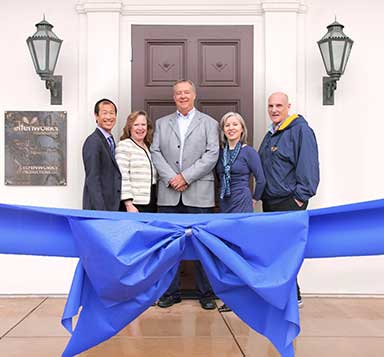 Prior to taking the lead as CEO, Tam had a long history of working with Elfenworks on various finance projects, bringing over twenty years of operating and financial background, building and managing fast-growth companies and startups, including starting the German subsidiary of Orchid Technology, creating a distribution system that tripled German sales, serving as C.O.O. and C.F.O. at New Life Bakery, and working on the management team at Fresh Express, helping transform a commodities vegetable company into the leader of fresh cut salads. He also spent two years as a Peace Corps volunteer in the Democratic Republic of Congo. Ken Tam received his B.S. from University of California, Davis and his M.B.A. from the University of California, Los Angeles. A father of two, Mr. Tam is especially taken with children's issues, education, financial insecurity issues, protection of the vulnerable, the rebuilding of social communities, and with creation of opportunities, unlocking the promise of a better tomorrow for all who would work hard to attain it. Fluent in several languages, he has spearheaded some of our multi-language projects.

Educational media expert Dr. Lauren Speeth leverages a lifetime of high-tech experience in the Silicon Valley, from the startup to Fortune 50 levels in her work at the Foundation. Speeth, whose educationally-oriented works have garnered critical acclaim, has lectured worldwide, and has years of experience teaching at the graduate and undergraduate levels on a variety of subjects ranging from leadership, ethics and entrepreneurship to mathematics, statistics, and computer science. Speeth is a Regent Emeritus of Saint Mary's College, a former Trustee of Mills College, and an External Advisor for the Stanford Center on Poverty and Inequality, where she was an architect/programmer and co-orchestrated the Center launch with a Concert for Hope.

A Lifetime Member of the Board of Councilors of The Carter Center, Speeth holds a BA from Mills College, a BSc(Hons) from Middlesex University, an MBA from Saint Mary's College of California, a DBA from Golden Gate University, and DMin and PhD degrees from Bakke Graduate University. In addition, Speeth holds a California Community College Teaching Credential in three areas (Finance, Management, and Computers) and an Advanced Computer Security Professional Credential from Stanford University, where she completed an Executive Program for Philanthropy Leaders and a rigorous chaplaincy training program. An active musician, Speeth subs on electric bass in a contemporary worship service and is a proud member emerita of The Peninsula Symphony's First Violin section.

Trustee Kim Schoknecht, Esq., is an Estate Planning Attorney and Partner at Pillsbury Winthrop Shaw Pittman in Palo Alto, and a certified specialist in estate planning, probate and trust law issues He has advised Elfenworks since the very beginning, and has a special heart for the student films of Campus Moviefest. When not shepherding Elfenworks, Mr. Schoknecht assists clients in establishing and maintaining a wide variety of trust vehicles and closely held business entities.He also frequently assists executors, trustees and beneficiaries (including charitable beneficiaries) in resolving difficult disputes that arise during administration, including will and trust contests and estate tax concerns. He was listed among the "Best Lawyers in America in Trusts and Estates (2013-2017) and is a frequent lecturer on estate planning and trust administration issues. Mr. Schoknecht also serves as a Trustee to the Mills-Peninsula Hospital Foundation.

Trustee Mark Vorsatz, Managing Director and CEO of Andersen, co-founded Anderson under the name WTAS in 2002. He has advised the Foundation since inception, and brings 35+ years of experience, a heart for key issues and an incisive intellect to bear on our behalf. In addition to his undergraduate and law studies, Mark attended a specialized law program at the University of Kent in Canterbury, England and an executive program at the Brookings Institution in Washington, DC. He has served as Chair of the Estate, Gift, and Trust Tax Committee of the American Institute of CPAs, is a member of the Tax Section of the ABA, has lectured extensively and taught estate planning in the graduate tax program at GGU and at Hastings. He is co-author of two treatises: Income Taxation of Fiduciaries and Beneficiaries and Tax Economics of Charitable Giving and co-editor of the newsletter, Family Business Advisor and has conducted numerous seminars on family business consulting and business disposition strategies and has written articles for The Tax Advisor, Taxation for Lawyers, Taxation for Accountants, and other prominent tax publications.

Trustee Elizabeth Carol Wied, Esq., is a senior attorney for the State of California with a deep background including experience in child services and health planning. Trustee Wied always manages to find enough time to support us in her role as trustee despite her heavy responsibilities with the State of California, advising our management team, and helping us to chart the course since our inception.

A graduate of California State University, Chico, Michael Dalling began his non-profit career as a child helping with the local food bank and continued volunteering (and recruiting his friends) through high school. Now, with over 15 years of graphic design experience, he continues to promote positive change through his lasting nonprofit work, including the logos used by the Stanford Center on Poverty and Inequality as well as many others. Michael is an award-winning designer whose work for us has been recognized by the W3, Pixie, and other outside awards organizations.

The Foundation benefits from a Council of Advisors, an advisory group comprising select young leaders - Millennials and Zoomers - with a passion for the greater good. Information flows both ways: members generously share their perspectives, talent and time with us in a non-fiduciary capacity while gaining an in-depth understanding of the areas in which we operate. They also serve to advance understanding of and support for the Foundation and our shared objectives in their respective circles of influence. Currently, these are (by order of first name): Alex Bondarev, Allxie Cleary, Andrew Billingsley, Benjamin Speeth, Jr., Nadir Shams, Nathaniel Tam, Salwa Kamal, Sylvia Billingsley, and Tatjana Tam.

Elfenworks Productions LLC provides consultancy help on an as-needed basis for on our Breathing Butterfly project.

Don Kane CISSPⓇ, MCP, joined us as a volunteer after 23 years at NASA's Ames Research Center where his responsibilities included security plan development & implementation and where he was a member of the NASA Ames Big Band. A lifetime musician whose versatility is informed by his background in classical, jazz, country, and rock, Don studied with Chuck Rainey, Carol Kaye, John Geanacos and Faith Winthrop, apprenticed with his father's band, The Three Beats, and joined the Musician's Union at age 14. He served in the Air Force Military Band during Vietnam then joined Eddy Arnold's band and moved to Nashville. After a stint of studio work and appearances on The Grand Ole Opry, he spent 30 years as a touring musician including with Bob Crosby, Xavier Cugat, Bob Hope, Sammy Kaye, Vaughn Monroe, Val Diamond, Ross Gualco, Cleve Jones Trio, and Skeeter Davis. He has also been a member of Masterworks Chorale, Crosswinds, Sounds of Joy, and the RCCT pit band.

Ryan Paul is the founder of Covalent Systems Group, specializing since 2002 in providing technology support to the discerning nonprofit, small business, or high-tech startup.

John Watkins of Futari Media has consulted on various projects since our inception. He was a co-architect with our CEO for the launch of inequality.com for the Stanford Center on Poverty and Inequality.